The unstoppable growth of photovoltaic energy

It is a fact: photovoltaics in Spain do not stop growing. In fact, at Keyplan we are currently building a photovoltaic installation in the parking lot of an important company located in A Coruña.

In 2019, the Spanish photovoltaic sector was in the Top 1 in Europe and Top 6 in the world, even surpassing Germany. It is admirable that after so many efforts, a sector that was stagnant for the last 10 years, has managed to reverse the situation and chain a sustained growth, year after year.

In mid-July 2020, the Spanish Photovoltaic Union (UNEF) presented its 2019 Annual Report, where it took stock of the situation of photovoltaic energy in Spain. 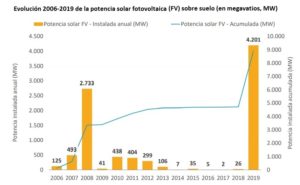 With the data in hand, he qualified 2019 as “the best year in history” for the sector, on the grounds that:

Analyzing the data for the first months of 2020, we see that the trend continues to be favorable for the sector, which has undergone a real revolution in recent years, going from being a stagnant sector to a real revolution. 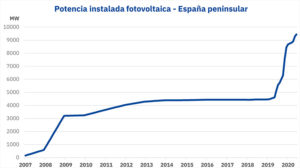 The boost that photovoltaics have received thanks to auctions and the ambitious goals of the Integrated National Energy and Climate Plan (PNIEC) has been the key to the explosion of photovoltaics after a decade of total stagnation.

In fact, the Spanish PNIEC itself has highlighted photovoltaics as the technology that will lead the energy transition and the decarbonization of the electricity sector in Spain. The objective of the Plan is to reach almost 40 GW of photovoltaics in 2030 and to position itself as the second technology in installed capacity, only behind wind power.

The UNEF is committed to “the development of the photovoltaic sector as a lever for economic recovery and to mitigate the effect of destruction of employment and productive fabric as a result of Covid-19” based on the privileged situation of Spain compared to other European countries: Spain has a high number of hours of sunshine, has available territory and a national photovoltaic sector that has a solid and competitive industrial base.

More specifically, if we look at the data, more specifically in the production of electricity, the records of photovoltaics have been happening since the beginning of the year. In February, photovoltaic energy surpassed the instantaneous production of nuclear for the first time, and not only that, in the first 7 months of the year, photovoltaic has already produced more electricity than in all of 2019 and 20% more than in all of 2018. 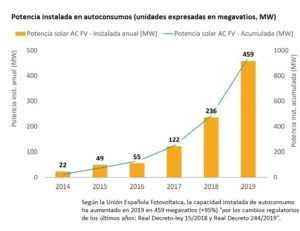 Despite the enormous growth that photovoltaics has seen in recent years, it still has to face some challenges.