Evolution of investment in renewable energy in the last 10 years

In the latest blog posts, we referred to the unstoppable growth of photovoltaic energy in Spain and how large companies had had to accelerate their investment plans in renewable energy as part of their post-Covid-19 recovery plan. But in 2010, in the midst of the economic crisis, the situation was quite different.

In 2020, it is clear that the health crisis generated by the coronavirus has changed the plans of many companies and accelerated investments in renewable energy, in part, thanks to 2 factors: government investments and the lowering of technology costs.

To give us an idea of the evolution of the sector, in the last 10 years the costs of solar energy generation have been reduced by 82%. If we want to understand how the current situation has come to be, we must analyze the evolution of the energy sector in Spain since before the economic crisis.

In 2007, the Government proposed a system that guaranteed the collection of a certain remuneration linked to the production of each megawatt-hour of energy from renewable sources.

Attracted by the compensation offered and by the possibility of contributing to the protection of the environment, more than 55,000 people opted for clean energy.

For years, this remuneration scheme was enormously successful and achieved, for example, a photovoltaic power output almost ten times higher than the target set by the Government. In 2009, Spain became one of the world leaders in investments in renewable energy, in fact, Spanish companies began to export their technology to the world.

In 2010, the Government approved very tough cuts in the remuneration of photovoltaic, wind and solar thermal technologies by establishing a maximum number of paid production hours per year, set well below the actual hours of annual production.

As if this were not enough, in 2012 not only was a tax on electricity generation of 7% established, but the new facilities would no longer receive any type of public subsidy. This led to a decrease in the production of renewable energy, as can be seen in the following graph. 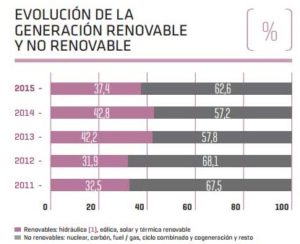 In the following years, many citizens who had invested their savings or applied for private financing, witnessed how the government, instead of continuing to encourage investment in renewables, led a series of cuts, completely ruining them.

In 2015, the majority of the population was convinced that renewable energies in Spain had suffered an indefinite halt as a result of the energy reform. However, the generation capacity of renewable energy was growing little by little, surpassing fossil fuels. 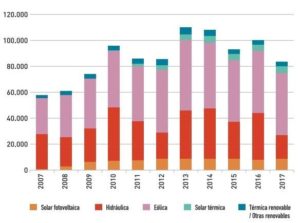 Evolution of renewable energy generation in Spain (Data in GWh)

Another fact that should be mentioned is that 2019 was the year of the decline in the use of coal, although it began the year generating over 13% of the total, since March its participation has not exceeded 5%. The gap left by coal has been covered, to a large extent, by the combined cycle which, together with nuclear and wind power, have accounted for 60% of the national total.

While richer countries are rapidly retiring older coal plants because they cannot compete with new renewable energy projects, in less developed countries (especially Southeast Asia) coal plants continue to grow thanks to financial support from the Chinese and Japanese investors.

In fact, in this graph where the evolution of the use of energy sources by country in the last 10 years is analyzed, we see that China continues to bet on coal in 2019.

Another conclusion that we draw from the graph is that, although during the first half of the 2010s, wind and solar energy installations were mostly concentrated in the richest nations, today many Latin American countries have already begun to invest in them .

Finally, BloombergNEF (a research agency specializing in the energy sector) estimates that CO2 emissions from the global energy sector fell by 1.5% in 2018-2019, thanks to the reduction in the United States and the European Union. Although it may seem like good news, emissions in China continue to increase and currently account for 37% of the total.

At Keyplan we were born linked to the world of renewable energy and we are committed to a sustainable environmental approach in each project we carry out.

If you need to know more about the services we offer, you can visit our website or get in touch with our team. We will solve your doubts and propose solutions as soon as possible.