Cogeneration plants: the future of the sector

At present there are numerous ways of obtaining electricity in Spain: from plants that use fossil fuels (mainly coal, natural gas and the always controversial nuclear power plants) to a wide range of renewable sources, represented mainly by wind and hydraulic energy.

However, there is a technology that is not well known, which is highly energy efficient, and which is considered one of the great options for the future: cogeneration plants.

According to experts, cogeneration will play an important role in the decarbonization of the industry and, at the same time, it will support the flexibility of demand. This statement should not be surprising, seeing the following graph we can see the decline in the consumption of fossil fuels while investment in renewable sources increases.

(Percentages of the total KWh generated)

The main difference between a cogeneration plant and traditional thermal or nuclear plants is that in cogeneration the principle of recovering and using the heat obtained is present, while in power plants, the steam used to move the turbines that generate electricity it is released into the environment. In other words, the main advantage of cogeneration compared to other energy production systems is its high energy efficiency.

In addition, in the traditional way, a power plant and a conventional boiler would be necessary to generate as much electricity and heat as that produced in a cogeneration plant. Therefore, it also reduces the use of space required to produce electricity and heat.

Finally, it is common for cogeneration plants to be located close to consumption points, so that voltage changes in electricity and long-distance transport are avoided, making better use of energy.

In 2019, cogeneration became a key energy tool for more than 600 Spanish industries, maintaining 200,000 direct jobs and contributing 20% ​​of the country’s industrial GDP, generating 11% of the national electricity and 20% of the demand for gas.

However, 2020 has been a turbulent year for all sectors and the energy sector was not going to be an exception. These months of stoppage in industrial production as a result of the Covid-19 crisis have reduced the use of this energy source. However, while the national economy is gradually recovering, cogeneration is being key to the industrial recovery of the country in sectors such as food, paper, chemicals, ceramics and automobiles, among others. 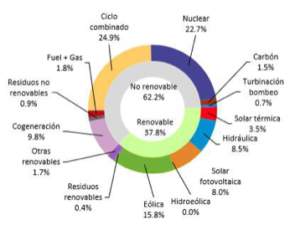 New regulatory framework before the end of the year

The reactivation of many industries that use cogeneration has taken place in an environment of total regulatory uncertainty regarding the remuneration framework in which the plants operate this year. However, the adjustment and support measures promulgated by the Government in June for the alarm period through Royal Decree Law 24/2020 invite optimism by offering support and confidence to the sector.

While the publication of the remuneration parameters for the second half of 2020 is still pending, the industries are operating their plants “blindly”, in a very volatile market. In addition, they claim that the regulation needs to enable the adjustment of the value and quantity of CO2 and make the adjustment of the estimate of the electricity market price in the remuneration, avoiding greater financial burdens.

Strengthening the reactivation of heat-intensive industries depends to a large extent on the government enacting regulatory measures that provide certainty to cogeneration production and new frameworks to promote higher levels of efficiency and investment, as is the case in countries such as Germany and Italy.

In the last decade, KEY PLAN has opted for this type of energy, developing numerous projects for cogeneration (CHP) and trigeneration (CCHP) plants in the Industrial and Tertiary sectors, both in Spain and abroad.

We cannot forget that cogeneration technologies are ideal for adapting in real time to different supply and production conditions. By joining forces and betting on renewable energies, industrial decarbonisation could be one step closer.